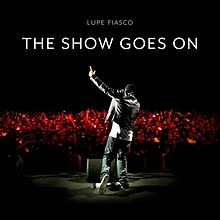 I heard it and instantly thought, hey that’s the song from Guitar Hero! Those of you who have also heard the song by Modest Mouse called Float On will instantly recognise the tune to this song which samples the 2004 hit very well.

Lupe Fiasco has used a lot of samples heavily in the past such as using “Daydream” by Gunter Kallmann Choir in his 2006 single “Daydreamin’” as one major example, but his latest single The Show Goes On takes what Modest Mouse done with Float On and speeds it up and gives it a cool modernised beat, which makes the song pretty damn good.

Especially if you have heard Float On before you will maybe find it a bit strange hearing it the first few times as it is very heavily sampled, but give it a few listens and you should grow to love it like me.

Another great single from Lupe Fiasco who’s album comes out on 8th March 2011.

Check out the music video for The Show Goes On below.