Leaving the wet land of Toon Lagoon behind we entered the world where Marvel comic books come to life, Marvel Super Hero Island. 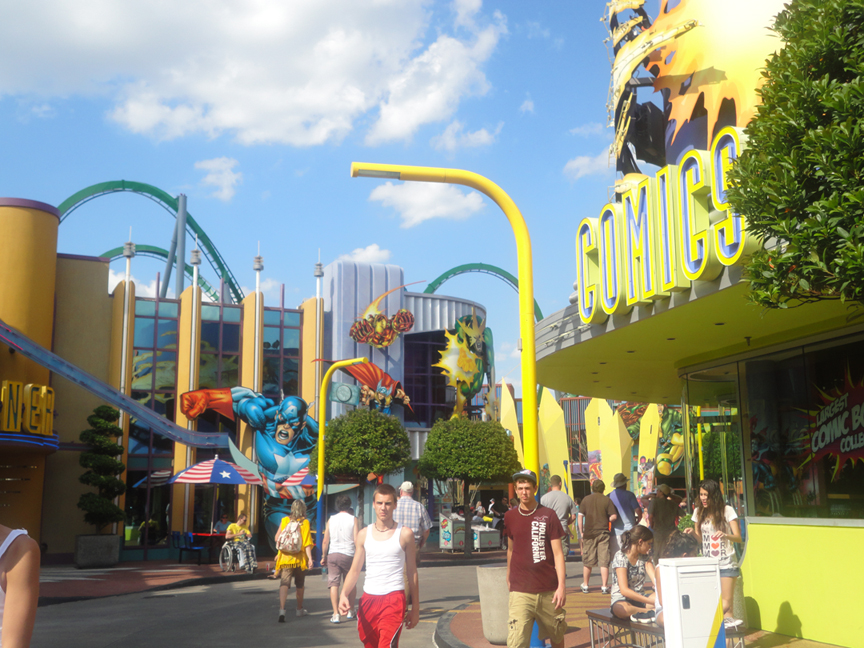 With some of the best attractions in Islands of Adventure, I was pumped full of excitement yet again when I walked through the brilliantly themed comic book world to an attraction that before this day held the crown as my favourite theme park ride of all time, The Amazing Adventures of Spider-Man.

Just seeing the entrance to the ride and the queue line again brought back all the memories of ten years ago when I was so excited just to be going on a Spider-Man ride, not knowing how blown away I was going to be once I took my seat in the ride vehicle.

The queue was fairly long but my excitement made it fly by and as I picked up my 3D glasses and took my seat I was ready yet again to be in awe yet again. The way the ride works is awe worthy just like Harry Potter and the Forbidden Journey, and considering this ride opened in 1999, it was years ahead of it’s time in terms of how they integrated the moving vehicles and sets with the 3D screens. 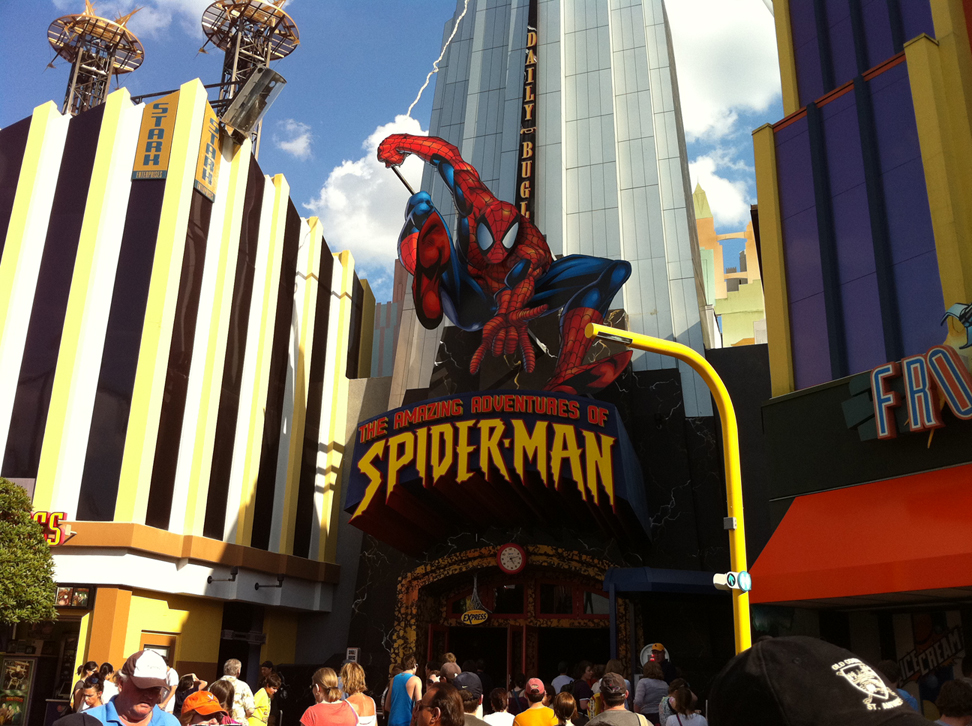 The ride sends you around New York City, with Spider-Man in order to stop some of his biggest enemies from keeping the Statue of Liberty hostage. Your vehicle moves in time with Spider-Man landing on the front, spins and shakes you when your attacked by the villains and uses real life effects such as water being squirted and you and fire blasting through one of the sets. All this combined with the 3D images you are watching on the screens make the ride another top class attraction not only in Islands of Adventure, but around the world.

It was still as good as I remembered, although in comparison to Harry Potter and the Forbidden Journey, the picture quality did look a bit dated. I thought it could do with an upgrade to match the quality of the picture in the Harry Potter ride, and about a month after leaving Orlando, Universal announced that they are planning to do just that, updating the picture to High Definition and update the rides mechanisms for the ride to be re-opened in 2012. 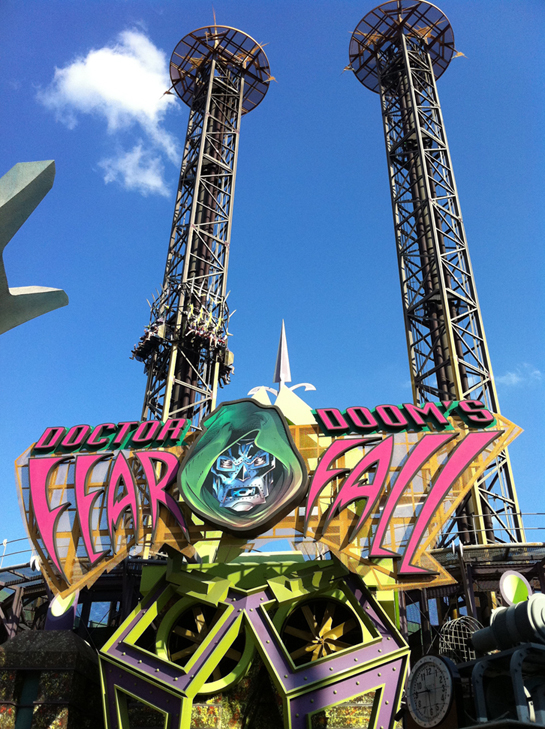 After Spider-Man we headed towards Doctor Doom’s Fearfall, two launch towers that shoot riders almost 200 feet in the air at 40 miles per hour. We queued for the ride and took our seats on one of the towers, and feeling a little nervous as these tower drop style rides are the attractions I don’t like the most, we waited and waited for the launch.

The anticipation was killing me and I just wanted us to go and get it over with, but before we launched the ride operator came back in and told us there was a technical difficulty and we would have to move to the other tower. This built up the ride more and made me even more nervous, and once we took our seat in the tower next door it was a matter of seconds before we launched up into the warm Orlando air.

The initial launch was an amazing feeling, and the small slow drops after were a lot nicer than the fast drops on the likes of Detonator back home. Overall the ride was quite underwhelming really apart from the launch and was over very quickly, but then again I suppose the ride really is just the launch at the start and nothing else really. 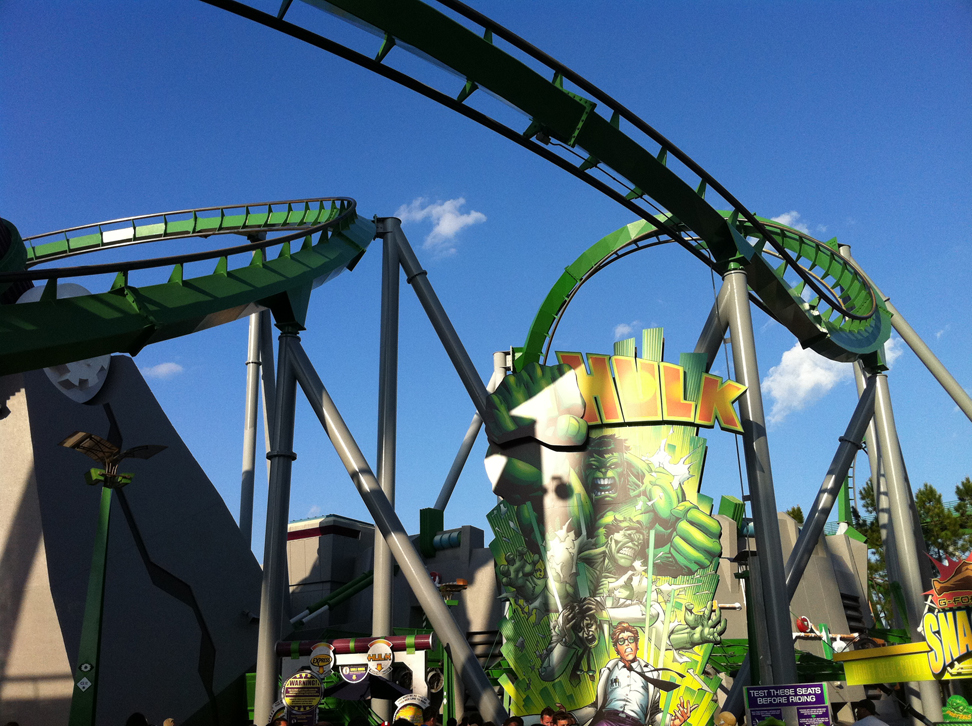 Finally it was time for the last ride of our day, the Incredible Hulk Coaster. Another ride I was eagerly anticipating after chickening out and not riding it ten years ago. I heard a lot of good things about the ride before riding it, and was excited as we entered the queue, which was just 10 minutes.

Once we took our seats and started our climb up the lift hill, I braced myself before being blasted 40 miles per hour out the top of the tube like a cannon ball, and then went through through twists, turns and inversions all the way to the end. It was a very good coaster, maybe not as amazing as it was built up to me as being, but was still a great ride, and the launch hill at the start was an amazing feeling again and would be very unexpected if you could not see the ride in action before. 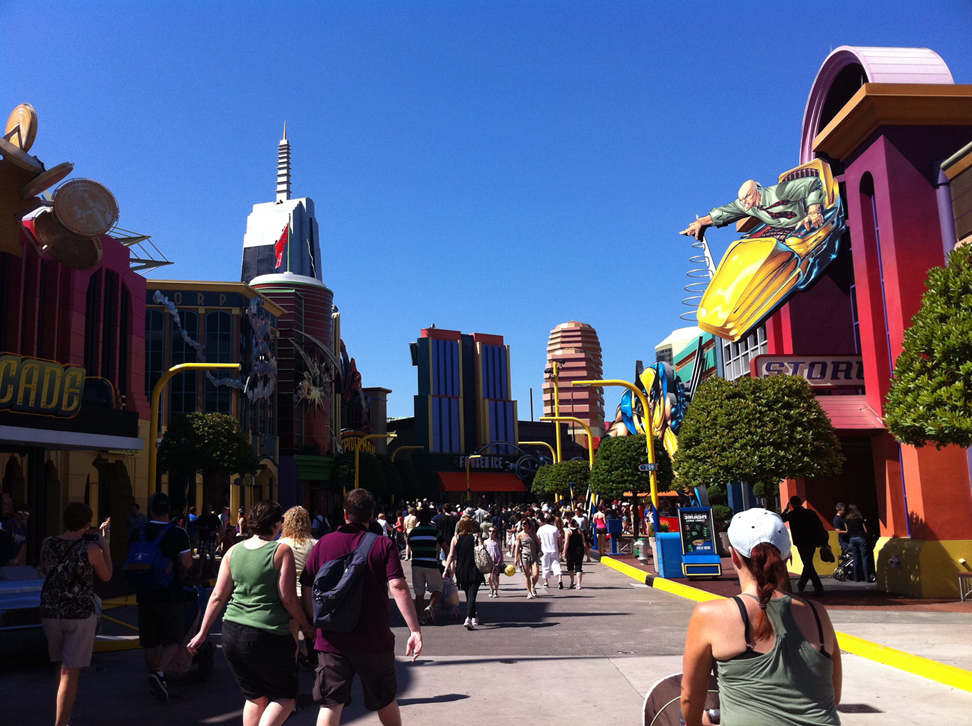 It was still unexpected for my Uncle though, who actually lost his sunglasses on the ride as we went over the first inversion after leaving the tube. Was quite a funny bit of entertainment to add to the thrill of the ride, and since the queue was so short, we almost felt like we had to go on again and even after the second time round, it was still a thrilling and exciting coaster.

So that was my first day at Islands of Adventure done, but with my Orlando FlexTicket lasting 14 days, it wasn’t the last time I visited the park.

I came back three more times in fact, not full days, but a couple of hours here and there just to get on the rides we hadn’t done yet and our favourites again and again. 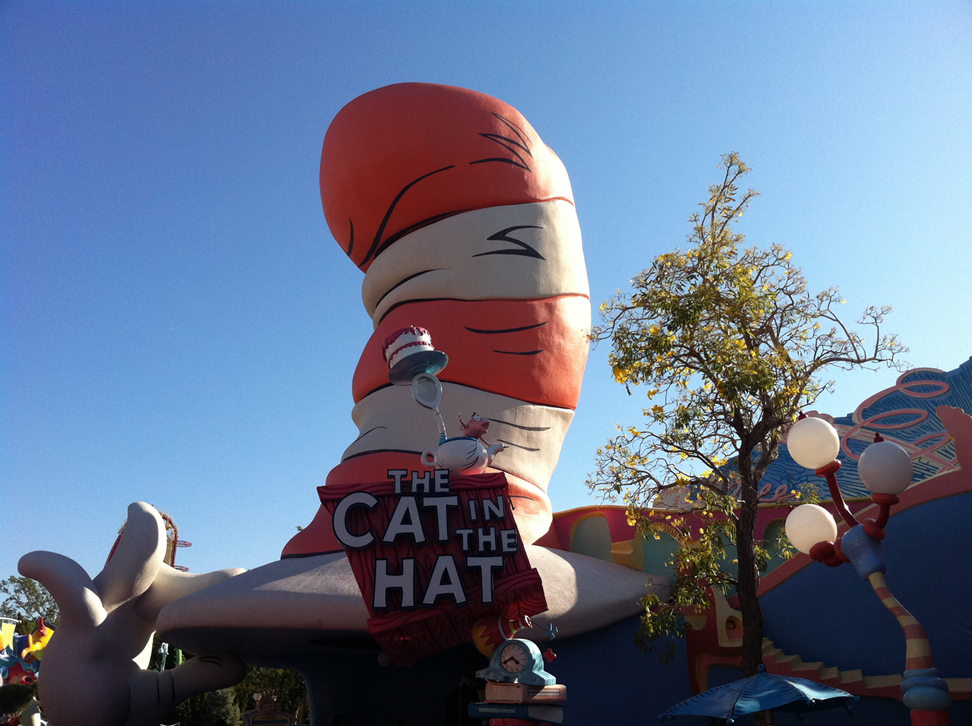 On my other visits I managed to do The Cat in the Hat ride in Seuss Landing, which afterwards made me realise that Seuss Landing was definitely an area too young for me, so I didn’t spend too long there afterwards. The ride was full of sharp spins and turns and was ok for my youngest cousins, but anyone older than 9 wouldn’t have much excitement for it or have much to do in the rest of Seuss Landing really.

So after quickly leaving that land, we also stopped in The Lost Continent with the only real attraction there being the indoor special affects show Poseidon’s Fury. I somehow remembered the attraction and what was going to happen from ten years ago, which shows it must have been a good memorable ride for a ten year old. The show uses some pretty incredible technology, such as cool movie like tomb openings, cylinder tunnel with water spraying around the walls, and water and mist screens. A very quick set changing technology in the final room also blew me away as the room went pitch black for a few seconds and when the lights came back on the whole room we were standing in was completely different! The attractions worth going on just to see that moment really, very cool, but the show as a whole is just a bit dragged out too long really. 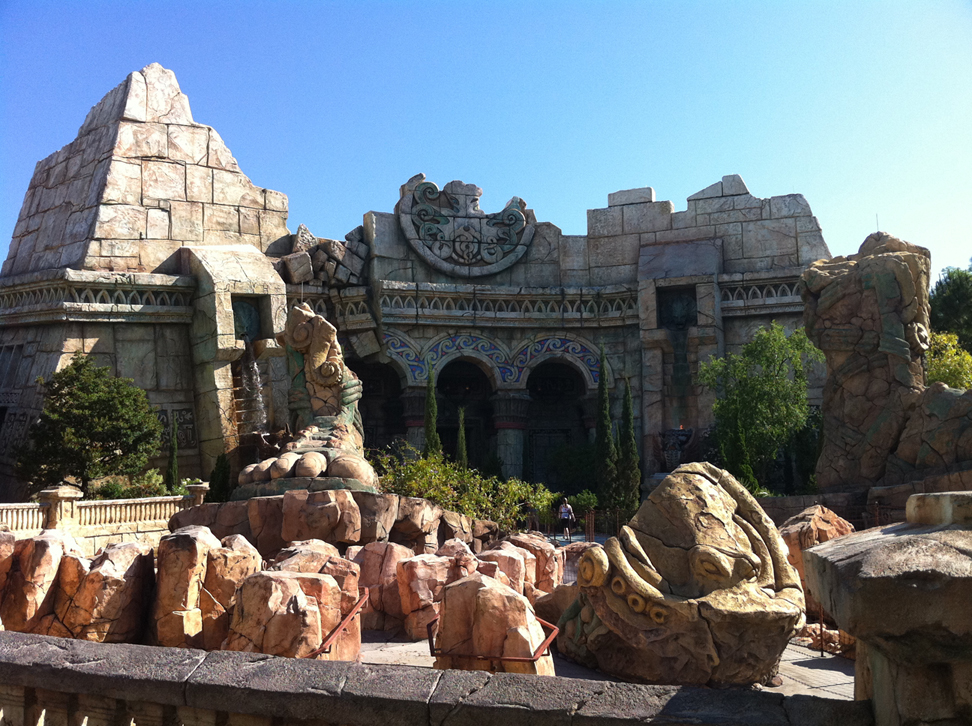 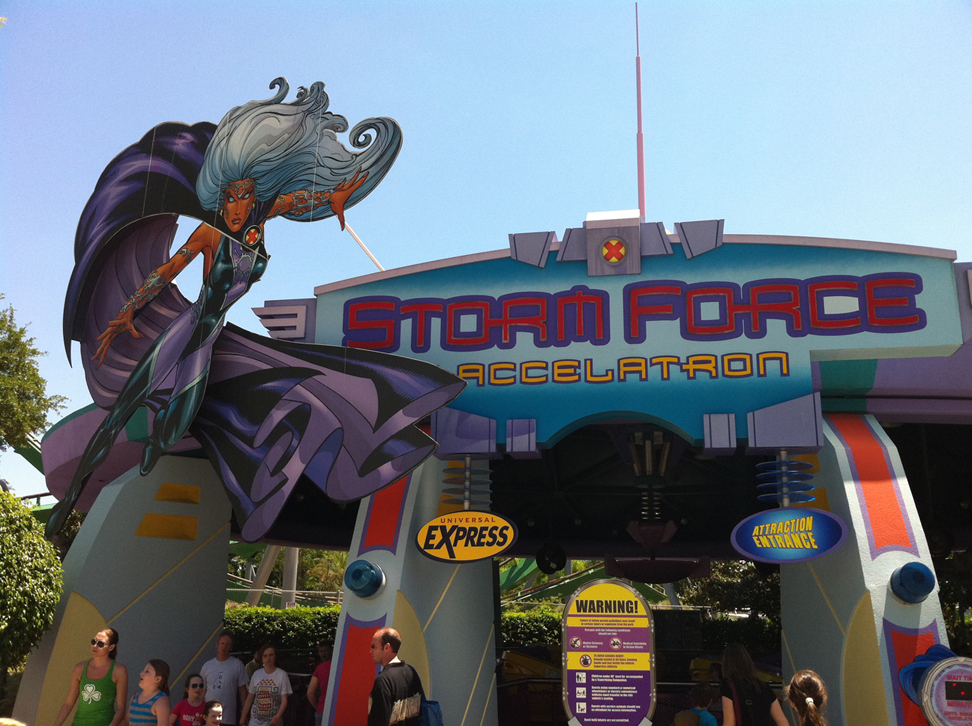 I also managed to get on the ride in Marvel Super Hero Island that I didn’t managed to before and that was Storm Force Acceleration. The name sounds awesome, but in reality it is just a tea cup ride. I went on it just to say I have been on it, but really its not a must do ride at Islands of Adventure by any means.

I also got to do the Red Dragon on the Dragon Challenge coaster in The Wizarding World of Harry Potter, which was very different from the Blue Dragon, but still very fast, twisty and good. 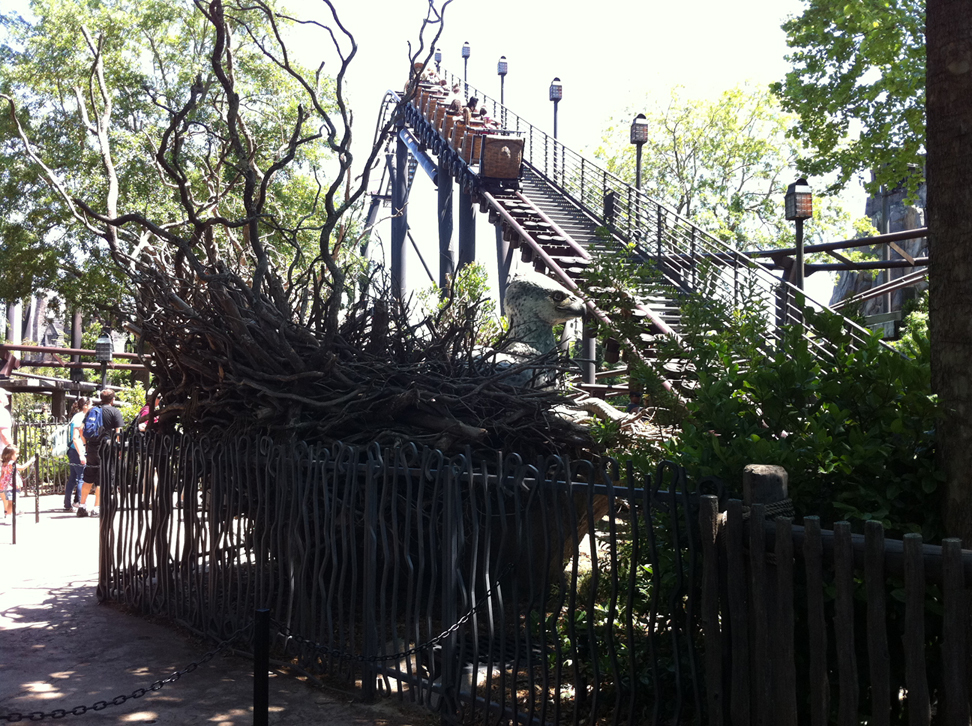 The last ride I wanted to do and managed to get done was The Flight of the Hippogrith, the children’s coaster in the Harry Potter land, and it definitely is just a children’s coaster. I was actually laughing the whole way round just how big we looked in the tiny little seats and how slow the ride was. I bet it’s amazing for younger riders who may not be able to get on the likes of the Hulk Coaster, but for anyone else, again its not worth queueing for if you don’t have time.

We also went on Harry Potter and the Forbidden Journey another three times and each time we went through the single rider queue as we didn’t fancy the hour long queues for a ride where no matter who your next to you will still enjoy it as much. We walked straight onto the ride doing this twice and had to queue a little bit the third time, but that was because of technical difficulties with the ride, which actually caused the ride to stop whilst I was on it just before the end of the station platform. 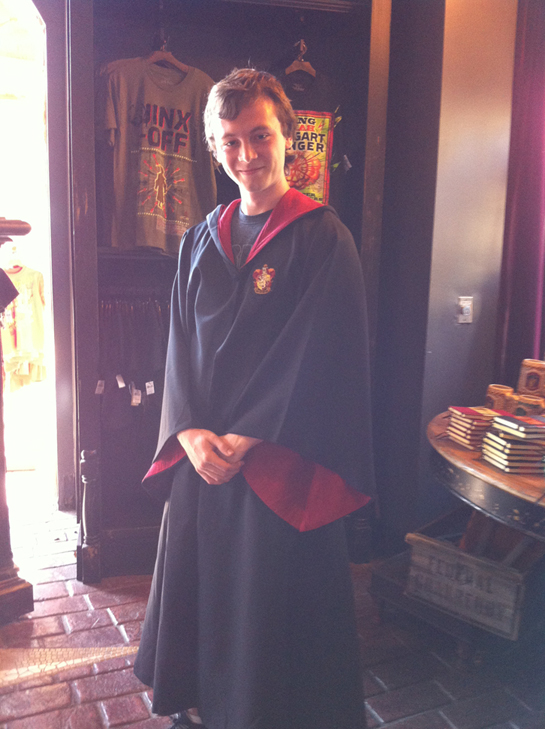 Every time I went on it I was trying to figure out how everything works, and in the process realised if you can, sit on one of the middle two seats of the benches as the animatronics will have a better affect on you than the outer two seats. Also when the ride did break down all the animatronics, lighting and smoke was out of sync with the benches which made it easily to see the tracks and how it all was working, and did ruin the ride experience kind of, so I was glad that happened after I had the awe factor of the first time rider.

Overall Islands of Adventure is a pretty insane theme park, probably the best all round in terms of adult and children’s rides out of all the parks in Orlando and the new Wizarding World of Harry Potter in particular is just incredible. The theming around the whole park is as good as it gets in terms of theme park theming, and the revolutionary attractions the park holds are amazing, from indoor rides combining 3D and animatronics to rides that’ll leave you soaked to the bone, Islands of Adventure has it all, even some pretty fast and great roller coasters.

Thank you for reading