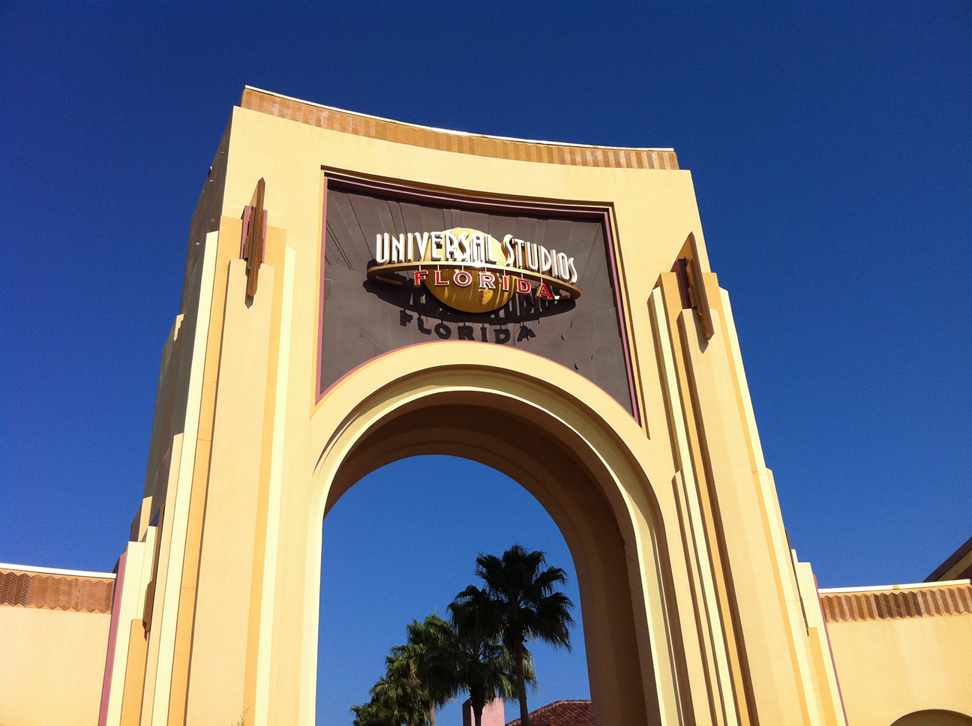 After already visiting some great theme parks Orlando had to offer so far on my holiday, I was still unbelievably excited the morning I woke up knowing I was heading off to the world famous Universal Studios Florida.

Packed with some of the most revolutionary and high tech rides on the planet, I didn’t waste my time hanging round, walked straight past the turn off for Islands of Adventure and in through the big golden archway into the park.

Immediately to our left after entering the park was the ride I was most looking forward to riding for the first time, the Hollywood Rip Ride Rockit. Standing impressively over 160feet in the air, the Rip Ride Rockit rollercoaster is the tallest in Orlando and takes riders around a twisting track, whilst having their own pre-selected soundtrack blasting into their ears.

As I entered the queue and saw the music options displaying on the screens around the line, I was getting very excited indeed for what was about to come. After not much thought at all I already knew I was picking Limp Bizkit – Rollin’ as my song for the ride, but there was plenty of other great choices on offer, including Daft Punk – Harder, Better, Faster, Stronger, Black Eyed Peas – Pump It and MC Hammer – U Can’t Touch This.

It made me want to ride the coaster more than once already just to hear all the different songs, and I hadn’t even gotten on the ride once yet!

As we approached the end of the queue and could see the station of the ride, I noticed the same clever technology used in Harry Potter and the Forbidden Journey was being used for this roller coaster, where the trains never stop moving. The last set of riders jump off and seconds later a new set are right where they were just two minutes earlier. Very clever way to keep the queues moving and get riders on and off quickly. 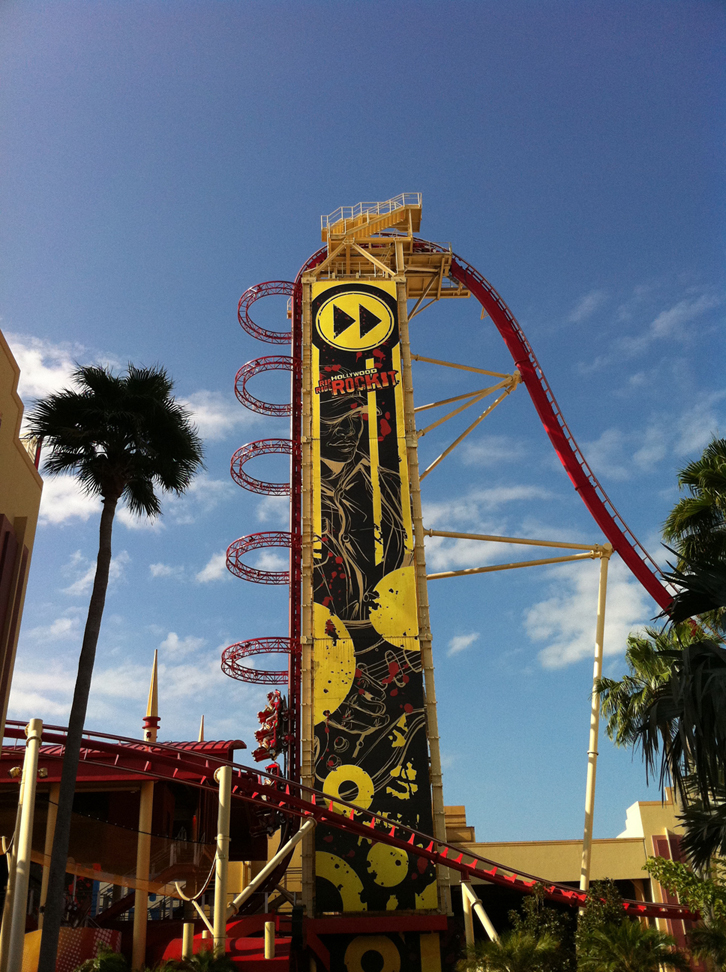 It was our turn to take our seats, and after watching the instructions of how to take your seat and select your song way too much in the queue, I was like an expert. I hopped into the seat pulled across the lap restraint and on that same arm that was keeping you locked in place was the touch screen to select your song.

With everyone rushing to pick a song before the train left the station, I managed to get Limp Bizkit – Rollin’ selected and the very second we left the station it began blaring out from the speakers in my seat. The lift hill of the coaster is a 90 degree vertical climb, which with only a lap bar holding you in was a bit scary. Even though it was a pretty big, sturdy lap bar.

We reached the top of our ascend, and before we could take in the view of the rest of the park, we went over the top and flying straight towards the ground. The ride features an amazing world’s first non inverting loop, which looks like a standard loop, but before reaching the point you would normally go upside down the track twists, putting you upright for the tallest point of the loop. It was an incredible feeling I hadn’t felt on a coaster before, and a great element to the coaster.

The rest of the ride was smooth, fast and had many twists and turns that were unexpected for a first time rider. The music blasting into my ears throughout had me shouting along to it and was another fantastic feature of the ride. Towards the end of the track, which is fairly long compared to most coasters, the train begins to slow, but the thrills didn’t stop there. Some insane drop with a twist in the track again took me by surprise and I could feel the immense G forces on my body as the train performed this move, another I had not seen before on a coaster.

After exiting the ride, there was a section underneath full of touchscreen pods, which riders could use to look at and purchase photos and videos of their ride. You could even preview the video, which gave us a hilarious 10 minutes of laughing at everyone’s faces in the videos. It was a really thrilling coaster and a very clever ride, with some amazing technology used that makes it stand out from other traditional coasters. It was a great start to the day. 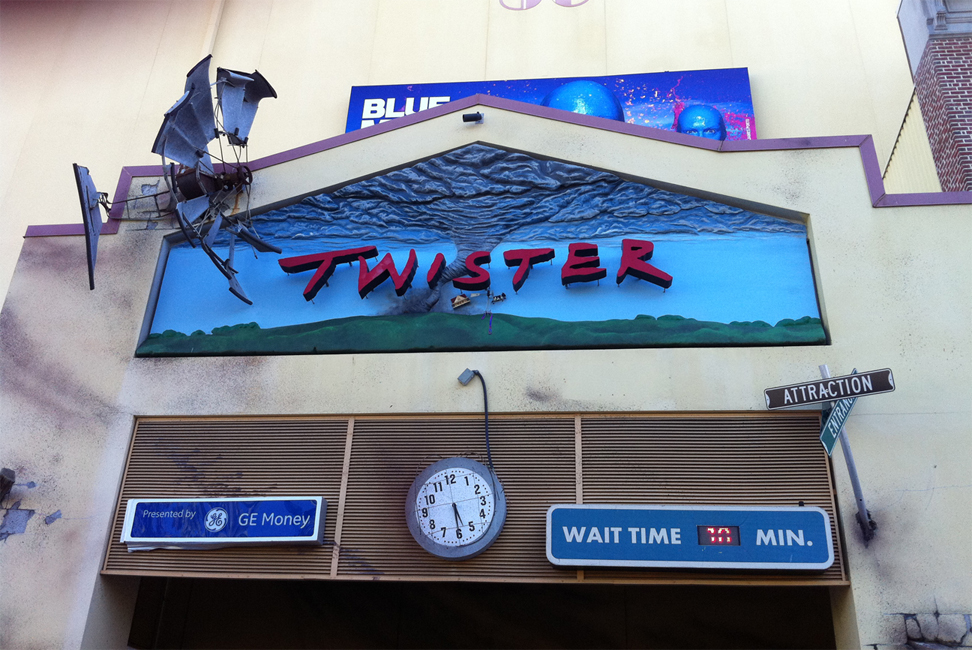 It was going to take a lot to top the Hollywood Rip Ride Rockit, but the next ride we joined the queue for is an absolute classic! I could remember this attraction from 10 years ago, when I was crying from how scared I was watching the videos of the terrifying Twister.

The queue for the ride was fairly long considering what it actually is, and after watching the introductory videos in all the different rooms, with the wind effects and flashing lights, I was just waiting for one bit in particular. We entered the final room of the ride where I knew what was coming, but was making sure my girlfriend wouldn’t miss it. All of a sudden there it was, the cow flying through the air. Absolute classic! The ride was a lot shorter than I remembered and could really do with being updated, but it is a classic attraction nonetheless.

With only two rides down, we still had loads of thrills and amazing attractions left to go on, so we wasted little time and carried on our journey around the park. Then we came across another attraction I was very excited to ride for the first time. The indoor roller coaster full of surprises, Revenge of the Mummy.