One documentary that was of a particular interest to me was Roadside, produced by FlashbackFilms.

I was interested in this documentary not only because I knew the people in FlashbackFilms very well, but because I was actually cast as the narrator for the documentary and provided the voice over for the poetic and thought provoking story-telling, which got viewers thinking about the subject of service stations.

Before, during and after recording my narrations for the documentary, all I knew was that it was about visiting service stations, the people you find there, and the affect that the service stations have on the “forgotten Britain.”

I was not told much about how it would be presented, the interviews they had done, or generally what the feel of the film was going to be, which after seeing it, I am very happy I didn’t know, as I was watching it not only as the narrator of the film but as an audience member too. 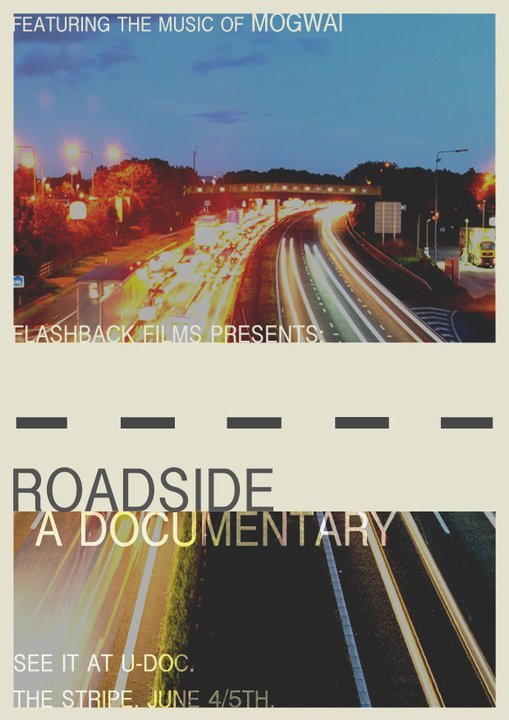 The documentary was presented in a meditation style, with the music of Mogwai throughout suiting this to a tee, and really getting me emotionally involved with the film and the characters interviewed. The meditation feel and narration about the bad affects of the service station really contrasted to the interviews of the people at these service stations, but seemed to work together beautifully. I felt drawn in by what I was watching and hearing as the people opened up to the camera, and I even forgot at times that it was me when the narration was playing.

The film included some cleverly used old fashioned project slides to split up interview topics for each person, and the cut scenes of looking out of the window on the motorway were hypnotising along with the music, and although I did feel at times there may have been too much footage of driving instead of more interviews, it did work well to set the mood of the piece.

The sometimes dodgy camera work may not have been perfect from a film making point of view, but for me it did not affect watching the documentary and almost did give it a real and home made feel to what was being shown on screen.

The narration and blurring text on the screen was about the affect that the service stations have on smaller businesses a small detour away, but it was the interviews with the genuin, aspiring people in the documentary, who really opened up and showed us the real people of Britain, reflecting on the journey of life which made the documentary great for me.

The film left the audience with a lot to think about, with the affects mentioned in the narration and also the interviews they heard throughout, and I did really enjoy watching it and it exceeded expectations I had and am really proud to have been a part of it.

I would like to congratulate FlashbackFilms on the success of Roadside so far, and wish them luck in the future, which will hopefully see the documentary go even further than UDoc and the University of Winchester.

View the trailer for Roadside, produced by FlashbackFilms below.