In 2009 we were introduced to the Wolfpack in Las Vegas and now in 2011 they’re back and this time they are in Thailand for the marriage of Stu(Ed Helms) and Lauren(Jamie Chung).

The Hangover Part II starts off with another phone call between Phil(Bradley Cooper) and Tracy(Sasha Barrese) with Phil explaining how “it’s happened again” and the film then follows the exact same format as the first film from that point onwards.

Just “one drink” turned into another night they could not remember the next day, and attempting to find the missing person this time round, Lauren’s younger brother Teddy(Mason Lee), unveils some more crazy antics they got up to, including stealing a monk and starting a riot.

This slightly altered version of the original is another funny comedy movie, but as a sequel it had me a bit disappointed that they did not try to make it a different storyline to the first movie. As it was so similar in fact, it was like I was comparing every moment in the movie to the first film.

Alan’s(Zach Galifianakis) speech in this one was not as good, the monkey instead of the baby was alright, getting a tattoo instead of losing a tooth was just kind of a more extreme scenario. It did ruin the film for me really that it was so familiar to the original but saying all that, there was still some very funny laugh out loud moments, most of which came from Alan’s one liners or silly actions, like throwing an anchor out of a speed boat on land. 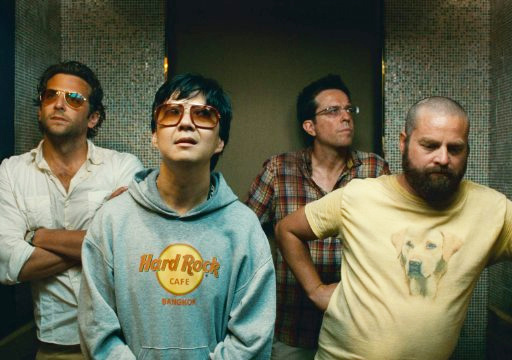 One thing that I did love about the film was Leslie Chow’s(Ken Jeong) involvement which brought a few more laughs to the film, and also if you remember Stu getting married in the first film, what he get’s up to on a night out in Bangkok is much more extreme!

The Hangover Part III is apparently already in the works to be the final instalment to the Hangover movies, with possible destinations at the moment rumoured to be Amsterdam or Dublin.

I really loved The Hangover, and apart from being far too similar I did really enjoy Part II as well, but I hope for the third and final film they at least attempt to change the way the story is told or make it a bit more different to the previous films, or it’ll be like we keep paying to see the same film just slightly altered.

However I definitely will still be excited to see what the wolfpack will be up to in their next Hangover whatever it is like and I’m sure it’ll still be just as popular with it’s fans as this sequel was.

Overall I do recommend seeing The Hangover Part II because it is still a funny movie, but just be warned that you will be watching basically the same film as the original.