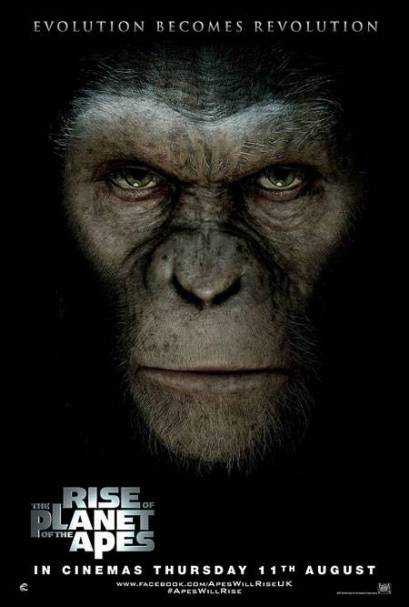 After not knowing much about the film until seeing the trailer in May, I went from being relatively uninterested in the old Planet of the Apes series, to being incredibly excited!

However, after what seems to be a huge side effect of the drug, Bright Eyes goes on a rampage around the office, and causes the experiments to be cancelled and all of the apes to be put down… all but one. Bright Eyes’ baby, who is found in her cage and taken home by Will.

As his new “pet” starts to grow, he shows the amazing human levels of intelligence like his mothers, which had been passed on to him. Will’s Dad Charles, played by John Lithgow, names the chimp Cesar, the ape that will go on to lead the revolution of the Planet of the Apes.

One thing this film thrives on is the excellent storyline it has, which I could easily sit here and describe for you in full, but will leave it for you to experience when you see it, and you really must see it!

The character development of Cesar in particular I thought was done superbly. You really did feel for the ape when it felt treated like a pet, and when it was being treated badly by Dodge (Tom Felton) when he had to be kept in the Primate Sanctuary, after attacking a neighbour.

The visual effects of the apes were amazing and some of the best I’ve seen! It was strange because at times I forgot I was watching animated apes on the screen as the acting and effects were so good it seemed real. Andy Serkis, playing the role of Cesar was a great choice in my opinion. After his experience of playing animated characters like Gollum in the past, it’s easy to see why he was chosen and himself and the special effects team that have worked on King Kong and Avatar, really do deserve a lot of credit for how good this film was.

There are some tense moments when the apes begin there escape from the sanctuary, and the films major clash between humans and apes takes place on the Golden Gate Bridge, which is full of great excitement and action for those of you who like watching apes vs humans clashes. 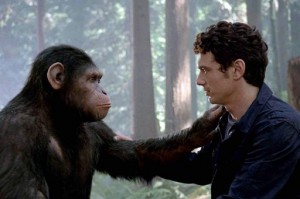 The film has a short segment during the credits which suggest another film in this reboot could be on it’s way. During the movie, Will starts working on the virus again to make it more effective and give it a quicker way to enter the system in the form of gas. However, this new form of the virus excels in Chimpanzees, but is fatal to humans, and when Robert Franklin (Tyler Labine) was exposed to the gas he starts sneezing blood. Looking for Will to tell him what is happening to him, he sneezes onto a neighbour Hunsiker (David Hewlett), who is then seen in the post credits scene in a pilot uniform walking through an airport, also sneezing blood.

We are then shown an animation of the virus spreading over the globe, indicating that the virus will soon wipe out most of the human race and begin the rise of the celever apes ruling the planet. After how good this film was, I was excited to see this post credit section hinting that it isn’t over, and I really do hope sequels are made!

To summarise, you have to see this movie! It doesn’t really matter if you have seen or heard of the Planet of the Apes before or not, it is just a brilliant film. A great story, great visual effects and it’s got a talking ape in it! What more could you want.

Rise of the Planet of the Apes : Official Trailer
Limitless : Review