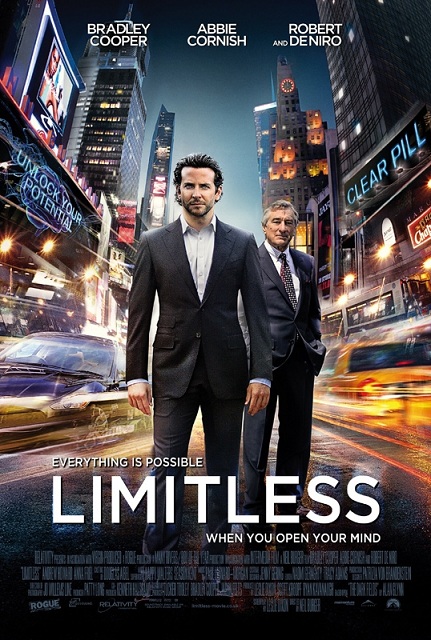 I didn’t really know what to expect when I rented this movie. It didn’t look good enough for me to go to the cinema to watch and although the idea was pretty cool, I didn’t really get how it would be a story.

Limitless stars Bradley Cooper as Eddie Morra, a struggling writer who after bumping into his ex-wife’s brother, is handed a clear pill, which claims to open up access to 100% of the brain.

The drug works and changes Eddie’s life, but with the murder of his ex brother-in-law and the brutal side-effects of the drug, is his climb to the top of the financial world worth the risks?

The film had some great parts to it, such as the tense moments when Eddie is being followed or having his flat broken into, but although the build up and his climb to success was beneficial to the story, it got a bit boring after a while.

Films where someone goes from nothing to something are all really similar, and this was just another example of that, but with a pill that was making it happen.

I thought that Robert De Niro was going to have more of a pivotal role in the film than what he had, as the trailer seems to set it up as him being evil and against Cooper’s character, when it really isn’t the case.

I’m not really sure if I liked it or didn’t. It was entertaining, but I wouldn’t call it a great movie or a must see.

Overall I’d say the film was OK. The idea of it I think is better than what the film actually was, but it is still worth seeing if it’s on, as it was entertaining to watch.