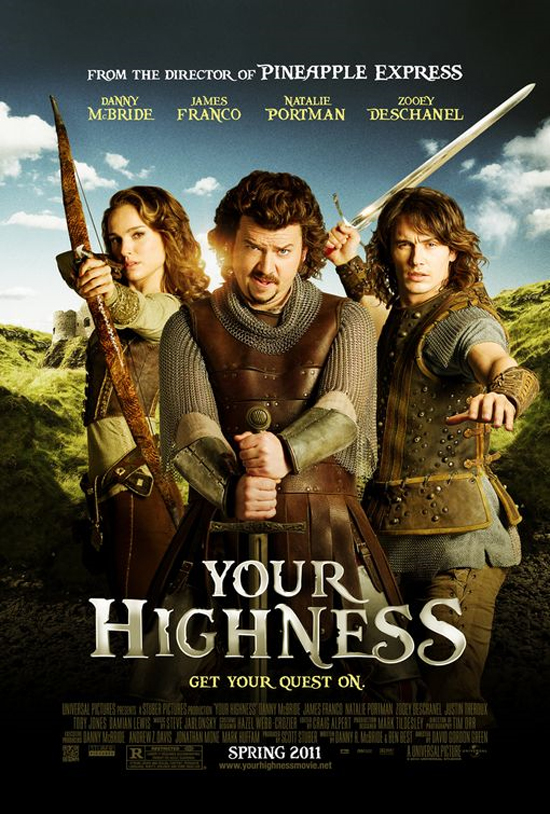 This was a movie that I was very excited to see this year! From the Director of Pineapple Express, a film which for me was just amazingly funny, I was expecting more or less the same sort of rude, messed up stuff that we saw in that movie, but with a new medieval twist to it.

Basically, that is exactly what the film was, apart from it took the rudeness to a whole new level! With needless swearing left, right and center, too many sexual jokes and references to count and just too many jokes in general that were trying to hit, but nearly every time missed.

It is fair to say I was a bit disappointed with Your Highness. The idea behind the film I think is amazing. James Franco plays Fabious, the heroic eldest son of the King of the land, brave, handsom and always successful on his quests. Danny McBride plays his younger brother, Thadeous, who is basically a slob, has never been on any quests, and lives in the shadow of his brothers success.

When they have to team up for the first time in order to save Fabious’ bride to be, Belladonna, played by Zooey Deschanel, we see how these two very different brothers work together on their quest.

The two brothers are accompanied by Thadious’ assistant Courtney, played by Rasmus Hardiker and on their journey, bump into Isabel, played by Natalie Portman, who because of the nature of this film, randomly strips off into her underwear and dives into a lake soon after they meet.

There are some pretty good moments in the film, and I did laugh out loud at some parts, but at times I also felt a bit bored. Something that is quite unusual for me, especially considering I was watching a comedy made by the same director of a film I loved!

The film can probably be best summed up by this part of the storyline:

Belladonna is captured by an evil wizard Leezar, played by Justin Theroux, who is keeping the young virgin in his tower until two moons align, so he can impregnate her at that very moment so she conceives a dragon.

I feel that this film could have been a lot better than what it was. A less needless swearword here and there, a few less of the unfunny sexual jokes and it may have been good.

I was expecting a lot more and it didn’t really deliver.

Your Highness – Trailer
The Inbetweeners Movie : Review
Movies To Look Forward To In 2011 : Part Two