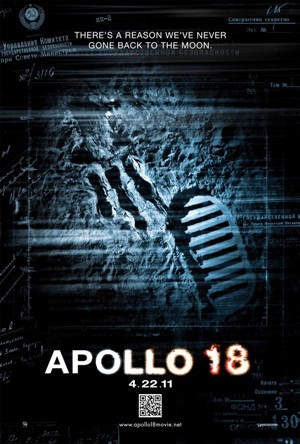 When I first saw the Transformers 3 trailer I loved the idea that there was more to the moon landing that was kept a secret because of what they discovered. The fact that it was Transformers they discovered put me off a bit, but now we have Apollo 18 which is another secret moon landing with the findings this time looking a lot more creepy and deadly.

The film is filmed using the handheld camera technique that resembles “found footage”, much like the Blair Witch Project and Paranormal Activity films, but the trailer makes this film look really intense and quite frightening.

I really like the idea and the look of the film and it seems to be increasingly popular to use the found footage technique in horror films nowadays, and although I do find the handheld camera element sometimes annoying, when used well, like this films looks, it turns it into a very scary cinema experience.

Why has no one travelled back to the moon since Apollo 17 in 1972? Well apparently when this film is released on 22nd April 2011, they will show us why!