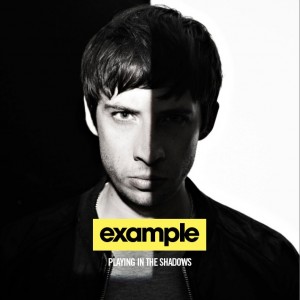 Fresh from Examples Official Facebook and Twitter pages we have the Official album cover for his new album Playing In The Shadows.

It’s something quite rare in music nowadays for artists to release two albums in back to back years, but the West London rapper turned “dysfunctional electro pop” artist is doing just that, after his success with Won’t Go Quietly last year.

He’s one of my favourite artists of last year and this year we have already had the number one single Changed The Way You Kiss Me and if the rest of the tracks are as good as that we are in for something very special indeed when the albums released this September.

The next single off the album has already been announced as “Stay Awake”, which is produced by another favourite of mine, Nero.

Along with Nero, some other huge names of producers of tracks on the new album include Michael Woods, Skream, Faithless, Brookes Brothers, Dirty South and Chase & Status!

I was a huge fan of Won’t Go Quietly which had some amazing album tracks along with the great singles released from the album and with all the tracks complete and an album cover ready, we only have a few more weeks to wait before we get to hear what else Example has for us in 2011.

His new single, Stay Awake will be debuting this Friday night on Annie Mac’s BBC Radio One show! So be sure to check that out, but if you can’t or decide not to I will almost certainly have a post about it Saturday. 🙂